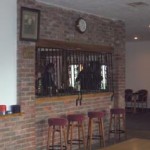 After the previous pavilion was gutted by fire on 8th September 1998, the new pavilion was officially opened in 2000 and was built to a much improved specification thanks largely to the generosity of Bill Wickham.

Bill Wickham was a valued member of the Buxted Park scene. He was one of the founder members of the Bowls Club and for many of its early years was its secretary. Bill was well respected in the world of Bowls at county and national level and was an extremely popular and well loved member. Bill died in 1997 and his love for “The Park” resulted in a very generous legacy to the Sports Association.

It is fitting that pavilion carries his name.